Silently and slowly – but inexorably… the Directives and standards we use for CE marking are updated, revised, and replaced – and we must account for them. They must be correct when referenced on your declarations of conformity and that means that you have to check, once in a while, to make sure that the product you are sending to the EU was tested and evaluated using the current, relevant EN standards and claim compliance to the current Directive(s).  F2 Labs suggests that you check the status of your CE marking Directives and EN standards at least once per quarter if you are actively shipping products to the EU. We will show you how in this article.

This means that you really need to check two things regarding the compliance of your product, from time to time, if you sell to the EU in an ongoing basis.

Fortunately, the EU puts this information at your fingertips on the world wide web. In this article we are going to work towards checking the status of EN ISO 13849-1, which was recently updated and replaced by a newer version of itself and we will detail how this will impact your project. 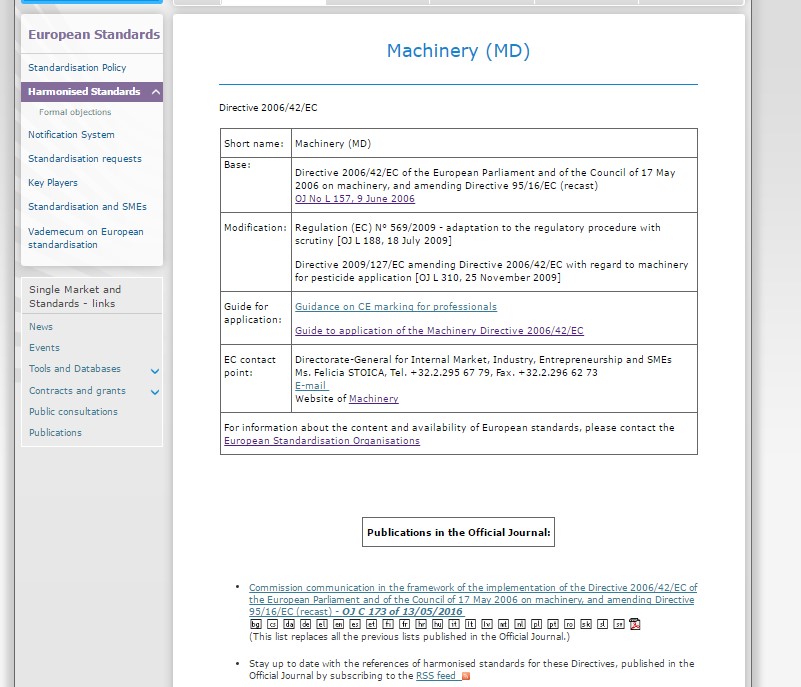 …In other words, before you place a CE marking on your product it must be in compliance with any applicable CE marking Directives and in order to do so you need to show that you have selected appropriate harmonized EN standards and tested/ evaluated your product according to those standards.

Yes, the standards are voluntary, but they usually provide the quickest route to compliance. Any deviation from the application of a harmonized standard during the compliance process for machinery will require a full risk assessment for each Annex I Essential Health and Safety Requirement not covered by the applicable standard. The standards route is the way to go if possible.

Continuing, let’s take a look at the next part of the European Commission’s Machinery Directive page, the display of the harmonized EN standards. 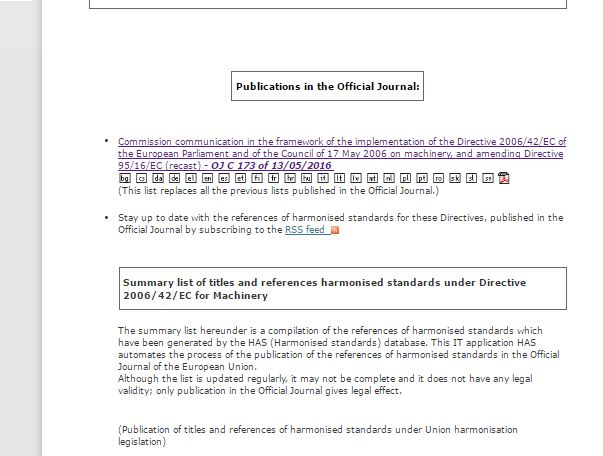 Below is the start of the list on the European Commission page. This is the page we at F2 Labs refer to for direction when selecting harmonized EN standards for consideration by our customers for their EU projects. 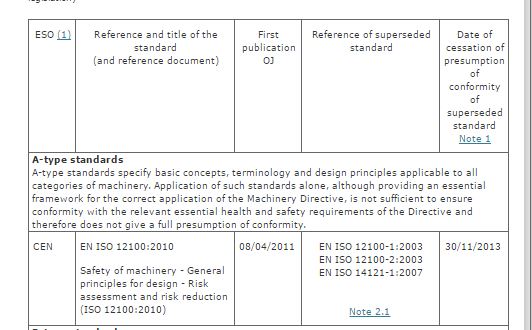 Let’s take a very close look at this chart so we can understand the information that it is giving to us. First, notice the reference to ESO. This is for the European Standards Organization responsible for making the standard a ‘harmonized’ standard. Frequently these standards are taken from the IEC or ISO. Usually the standards are the same as the IEC or ISO versions – but many times they are not. This is why you must reference to the EN version of the standard. EN 60204-1 is not the same as IEC 60204-1, for the purposes of CE marking. The EU has committees of engineers who decide on the standards and these groups are CEN and CENELEC.

Moving right across the chart we see the reference to the particular standard. There are many, many standards on this list and the task for you or, better yet, your accredited 3rd party testing organization (for instance, F2 Labs) is to select the standards from this list that are applicable to your product and help to prove that the product complies with the Essential Health and Safety Requirements from Annex I of the Machinery Directive.

Looking at EN ISO 12100:2010 we see that it was first published on April 8, 2011 (note: in the EU the month is listed second when looking at a date in the format dd/mm/yyyy). April 4, 2011 was the date that this standard was officially unveiled to the world as an acceptable standard to use for risk assessment for products falling within the scope of the Machinery Directive.

You may be asking yourself this after reading the above: “How does this affect my product if I used a third party (like F2 Labs) to test and evaluate a machine I built in 2012 and started shipping to the EU, and I am still shipping it to the EU?”

That is a good question and the purpose for this article. Let’s say you manufacture a machine and have a few orders per year for the EU. Chances are your machine will be within the scope of EN ISO 13849-1, which is a B-type Machinery Directive 2006/42/EC EN standard. (B-type standards are, “family standards,” meaning they are likely applicable to a wide-range of products.)

EN ISO 13849-1 is a standard for control systems on machines – it is applicable to most types of machinery. Notice that it is also an ISO standard, ISO 13849-1. Note that for European projects you must reference the European version, EN ISO 13849-1.

Understanding what was written previously in this article we know that means that European machinery designed and evaluated using EN ISO 13849-1, could use EN ISO 13849-1:2008 until June 30, 2016. Starting on that date you must show that your machines complied with EN ISO 13849-1:2015. Therefore, on your declarations of conformity you must reference the 2015 version of the standard, if you used it, for shipments on or after June 30, 2016.

Just as important, you must be able to prove that you used that standard. It is not enough to list the correct standards. Behind the declaration of conformity, you should have a compiled Technical File to be able to prove to the European Authorities that your product actually complies with the current, relevant standards. Otherwise your product does not comply with the Directive.

The Technical File is your proof that the machine was actually compliant with the applicable CE marking Directives at the time you sent it to the EU. Further, you must be able to compile it and send it to the authorities, upon request, for ten years after you ship. Following is Annex VII from the Machinery Directive 2006/42/EC which is the Annex for the Technical File. Note in particular the highlighted sections. 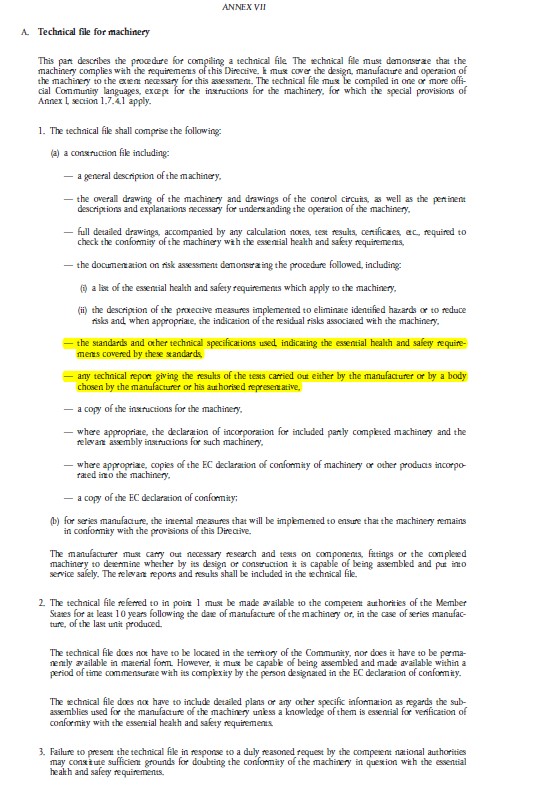 How can this impact me? Good question. Let’s take a look at a hypothetical situation that can show the ramifications for taking short cuts.

Widget Machine Company builds an industrial press and sells it to a company in France. The French company uses it for seven years and then decides to upgrade its machine. In order to fund the purchase of the new machine they sell the Widget Machine Company industrial press and use an auction company to do it. The auctioneer sells it to a Romanian company and the machine is shipped to Romania from France.

No translations are performed on any of the manuals from French to Romanian and after a few weeks a worker decides to service the machine for some issue. He removes a guard and cannot figure out how to reattach it. The next shift starts, the guard is on the floor next to the machine, and a new worker crushes part of his hand. The authorities will be involved and will make contact with Widget Machine Company to make a request for the Technical File. This will come by court order.

It is at this point you will either be glad you followed the correct procedure, used the right standards, and put your Technical File together at the time you built the machine and kept it updated or you will be looking for a lawyer to represent you in a European court.

A quick search of the Official Journal of the European Union yields many examples of court cases involving companies that did not follow the correct procedure or were unable to prove that they did. 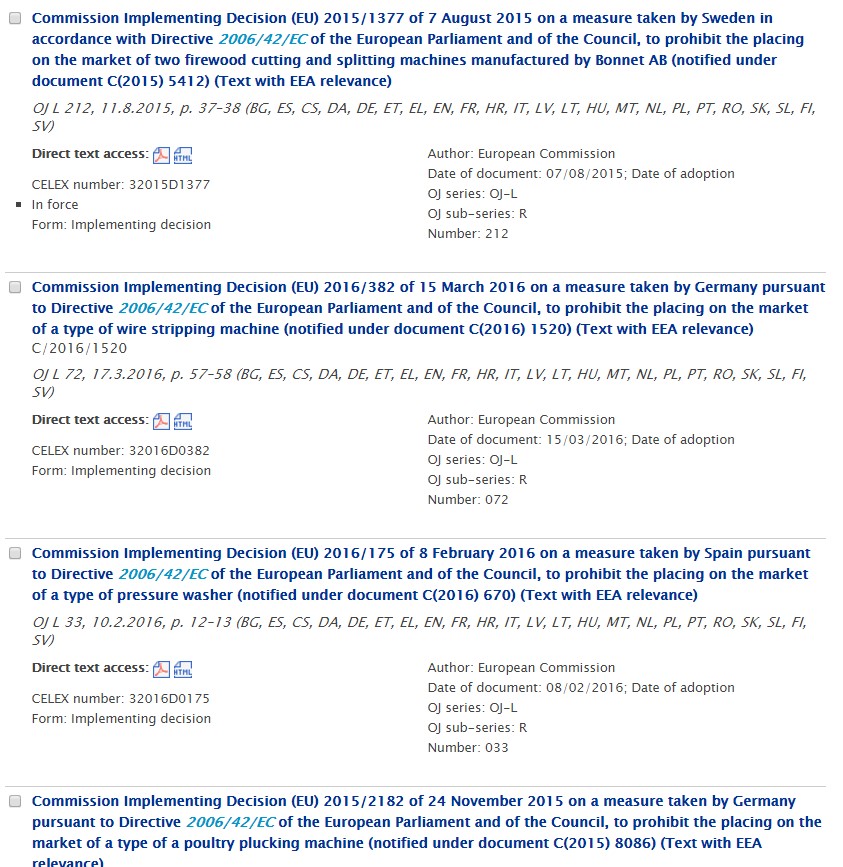 Looking at the first case in that list (there are many, many more), we see it is titled Commission Implementing Decision (EU) 2015/1377. Opening that document and reviewing it tells us that a company in Sweden manufactured and sold log splitting equipment. It somehow came to the attention of the authorities and now the company is barred from placing a CE marking on the equipment… and barred from the entire EU.

Making sure that your equipment is appropriately compliant with the current Directives by using currently applicable harmonized EN standards will prevent this.