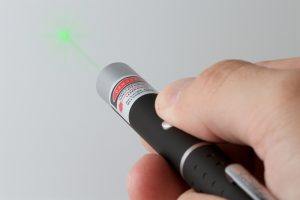 Laser devices sent to Europe are subject to specific safety requirements. Some of these requirements are applicable even if the rest of the device is seemingly innocuous.

To start with, we will present a case where a device appears to be completely harmless and therefore out of the scope of any applicable safety legislation. We often see small pen-sized laser-pointers that are powered by off-the-shelf batteries. Since these batteries are below the scope threshhold (75 VDC to 1,500 VDC) of the Low Voltage Directive 2014/35/EU it appears that the manufacturer would not need to submit the laser pointer to a lab for safety testing.

The Low Voltage Directive 2014/35/EU (aka the LVD) is associated with a few harmonized EN standards dealing with lasers. The first LVD laser standard that must be considered is EN 60825-1:2014. See below from the European Commission’s page for the LVD:

This standard is challenging to comply with, namely because so few labs in the United States provide support for compliance to EN 60825-1 or the IEC version: IEC 60825-1. Keep in mind that if your laser pointer had a way to connect to AC mains power (say, for instance to an AC/DC adapter) then it would be considered as an AC-powered product, likely over the AC power threshhold of 50 VAC for inclusion in the scope of the LVD, and therefore you would have to comply with EN 60825-1 in order to place a CE marking on the laser.

But, what about a low-power, battery-powered, laser pointer? What do you do about that in order to properly ensure its safe use?

However, just like a CE marking Directive, in order to claim conformity, usually the fastest route is via the presumption of conformity by complying with harmonized EN standards. In this case, the GPSD and a laser device, there is no harmonized EN standard for laser product safety compliance indicated in the official list published in the Official Journal of the EU. However the EU published Commission Decision 2014/59/EU in 2014 regarding laser products and the GPSD.

2014/59/EU continues to explain that harmonized standards must be developed for the safety of consumer laser devices. Additionally, a notification from the European Commission was published in June 2014. Most notable is section 2.4:

The most recent reference to consumer laser protection available after a web search is the same notification published in May 2016, here. See below the reference to laser products and the GPSD.

The number in the last column, December 31, 2017, refers to the date the deliverable is due. It appears there will be a specific safety standard for consumer lasers, soon. This means that laser products out of the scope of another safety Directive (like the LVD) will need to comply with a specific laser safety standard in order to be compliant with the GPSD.